about the us-ireland alliance 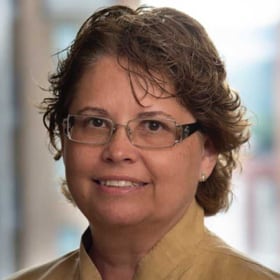 Trina Vargo is the president of the US-Ireland Alliance, an organization she founded in 1998. From late 1987 until April 1998, she was employed by Senator Edward M. Kennedy and served as his foreign policy adviser during the critical years of the Northern Ireland peace process. Trina is the author of Shenanigans.

Vargo created the US-Ireland Alliance to build ties between the US and the island of Ireland for future generations. She also created the George J. Mitchell Scholarship program, which sends future American leaders to institutions of higher learning on the island of Ireland for a year of graduate study. Nearly 300 Americans apply annually for one of the 12 prestigious scholarships. Vargo also created the annual Oscar Wilde Awards to honor the Irish in entertainment. The annual event is currently held at J.J. Abrams’ Bad Robot production company in Santa Monica and Vargo has played an important role in encouraging film production in Ireland, including the filming of STAR WARS THE FORCE AWAKENS.

Working directly with political leaders in Northern Ireland, the Clinton Administration, and the Irish Government, Vargo served as a key behind-the-scenes player in the Northern Ireland peace process, including the granting of a visa for Sinn Fein leader Gerry Adams to visit the US in 1994. That visa was central to the subsequent IRA cease-fire and the peace talks which led to the 1998 Belfast Agreement. As a foreign policy adviser to Kennedy, Vargo’s wide-ranging portfolio included imposing sanctions on Libya following the 1988 bombing of Pan Am Flight103; spear-heading the efforts to bring free and fair elections to Guyana in 1992; changing the way the State Department analyzed United Nations voting patterns which impacted on foreign aid eligibility; and getting Jews out of the Soviet Union and Syria, and Americans out of China after Tiananmen Square.

Vargo also served the adviser on Irish issues to the campaigns of every Democratic nominee for President from Michael Dukakis through Barack Obama. She advised several American Ambassadors to Ireland going back to mid-1990’s when Jean Kennedy Smith was nominated as President Clinton’s Ambassador. Vargo also served as an adviser to Madeleine Albright when she was preparing for her Senate confirmation hearings to become the US Ambassador to the UN. She has provided testimony to the House Appropriations Committee and addressed the Joint Committee on Foreign Affairs in the Oireachtas (the Irish parliament).With the achievement of the Northern Ireland peace agreement, Vargo recognized how the relationship between the US and the island of Ireland would naturally change, something which she wrote about in the Washington Post on the launch of the US-Ireland Alliance.The Alliance has held golf tournaments in Ireland to introduce leading American executives to their Irish counterparts, which has resulted in business value for both countries. The Alliance also provides materials for high school teachers to teach about Ireland.

In 2007, Vargo wrote a prescient piece on immigration reform as it pertained to the Irish. While it made her the bête noire of a small number of vocal individuals, her article was broadly welcomed, including by the former Irish Prime Minister Garrett Fitzgerald, the former CEO of Coca Cola, Don Keough, the then editor of The Irish Catholic, politicians, business leaders, emigration experts, and immigration leaders. A few months after her piece appeared in the Irish Times , Irish Prime Minister Bertie Ahern articulated similar views when he visited the United States.